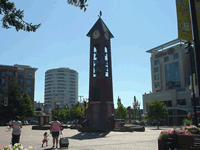 Our fee to have documents served on a residence within 5 miles of the Vancouver courthouse is $70. There is an additional charge of $3 per mile for each mile outside of that 5 mile radius. Maximum of two attempts are made.

To have documents served on a place of business is $60 when within a 5 mile radius of the Vancouver Courthouse and an additional $3 per mile outside of that range.

Process serving includes filing a proof of service with the court clerk.

Forms and documents prepared for divorce and other family law.

Vancouver has a median household income of $52,004. Vancouver, WA has a population of 169,982. Portland has a cross state economy with nearby Vancouver.

Vancouver is known historically as a trading post of the Hudson Bay Company at Fort Vancouver. The city was named after the fort, the fort was named for Captain George Vancouver.