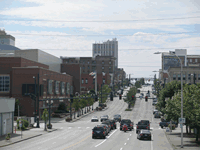 Process serving for the courthouse through the north end of Everett is $60, south Everett is $80. For an exact quote, give us a call.

Everett divorce document services can fill your document needs by helping you fill out the forms, get them filed correctly, and have the other party served if necessary.

Documents served in the Edmonds, Mountlake Terrace, and Lynnwood areas.

Everett was named after the son of Charles L. Colby, as in Colby Ave. Other early founders along wit Colby were the Rucker Brothers, Colgate Hoyt, Henry Hewitt, Jr., John D. Rockefeller, T.F. Oakes, Alexander McDougall, and Charles W. Wetmore, all of which streets were named after.